Elo Meter – The test that calculates your Elo

When I was shown this site, my first thought was that it was a bit of a gimmick, kind of like the “IQ tests” that pop up here and there, and where you congratulate yourself on being a ” genius ”. Insert the smiley here. However, the references are a bit more substantial, as are the documents supporting the theory.

The home page is clean and clear. Start your engines!

In a nutshell, the idea is to take a set of 76 position tests to the best of your ability, some of which have simple and clear answers, and others that are much more flexible and allow for a second or third – best shot. Your second best choice, if so, will not be considered a failure and your final grade will be adjusted accordingly. Positions vary in both difficulty and content, and while the initial positions are all completely basic in nature, they quickly increase in challenge after which they vary wildly, or so was my impression. 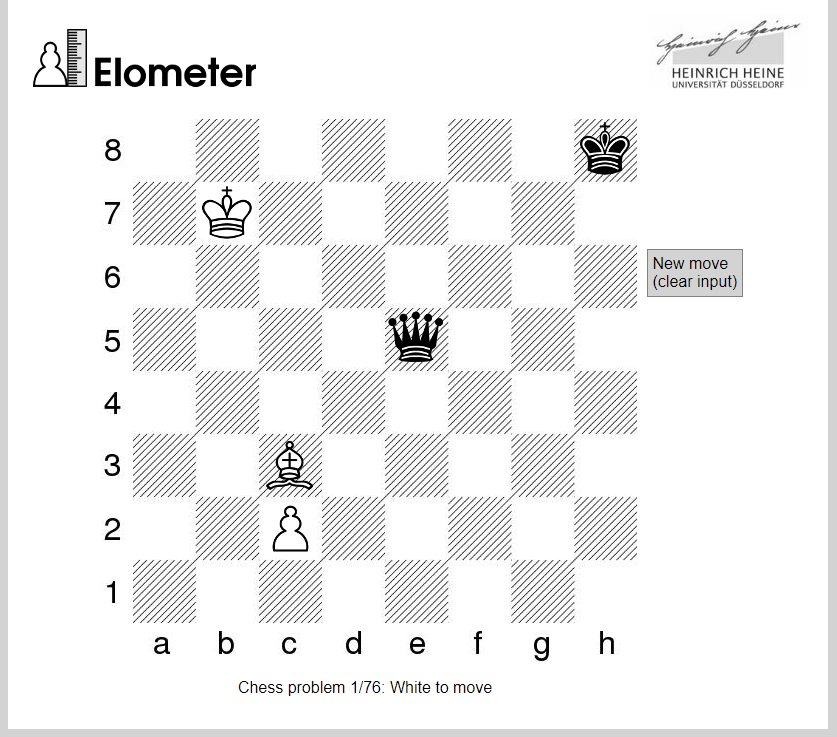 This is the first position, and as you can see it is as easy as it gets. It won’t last long, but it does mean that it’s almost impossible not to be successful.

Once the test is over, they ask a number of questions about your conduct on the test, such as how often you play, how long you have been seriously playing chess (over 30 years for me, with caveats ), how seriously you took the test. , and of course if you have researched the answers to any of the real questions with an engine or a database. I don’t see the point of doing this frankly, since the only person you would be fooled is yourself.

Out of the 76 positions, I recognized four. Two were actually pawn finals that I saw recently in Dvoretsky’s endgame manual.

The science behind the test set and how it arrives at its results is really the most fascinating part of it. The authors of the test are Birk Diedenhofen and Jochen Musch from the Institute for Experimental Psychology at the University of Düsseldorf. After completing the test and the short quiz, the authors explain:

We used item response theory (or “latent trait theory”; Hambleton, Swaminathan, & Rogers, 1991) to derive an estimate of your playing strength based on your responses to a set of chess problems with known properties. To arrive at this estimate, we used the two-parameter Birnbaum model (Lord, 1980) which allows items to differ a) in difficulty and b) in discriminating power. The set of chess problems we used is taken from the “Amsterdam Chess Test” developed by van der Maas & Wagenmakers (2005), who presented their chess problems to a sample of 259 participants in a tournament. open Dutch. The national Elo score for these participants ranged from 1169 to 2629. Using a subset of the items from this test (the Choose-A-Move item sets A and B), we were able to calculate a maximum likelihood estimate of your ELO score based on a prediction formula regressing the latent capacity estimates from the Birnbaum model on the ELO scores from the comparison sample. Using the test information function, we were also able to calculate a 95% confidence interval for this estimate.

What is item response theory?

It is based on the application of mathematical models associated with test data and is often considered superior to classical test theory. It is also the science behind famous higher education tests such as the Graduate Record Examination (GRE) and the Graduate Management Admission Test (GMAT).

IRT is based on the idea that the probability of a correct / entered answer to an item is a mathematical function of the person and item parameters. Examples include general intelligence or the strength of an attitude. The parameters on which the items are characterized include their difficulty; discrimination (slope or correlation), as well as to represent how much the success rate of individuals varies according to their abilities. (The source: Wikipedia)

This raises the question of the precision of the estimates. I absolutely do not question the sincerity and integrity of their efforts, but I do know that I was last ranked 2149 FIDE a little over a decade ago, my last serious games, and well that I recently returned to training as stated in a previous article, “Study Chess with Me – The Video Series”, common sense tells me that the result I got is more Walter mitty than reality. 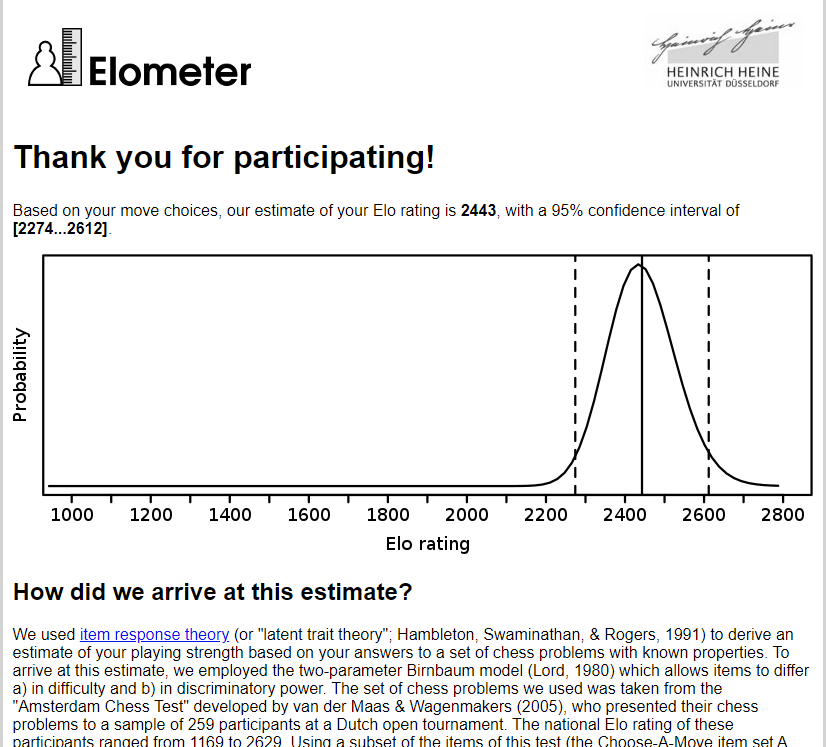 Hard to know what to do with it, but I doubt I’m alone

Nevertheless, it is obviously better for him to tell me by mistake that I am rated higher, than to be told that I am lucky to be over 1800, but still … Insert the second smiley here.

Regardless of the obvious grain of salt it has to be taken with, if you don’t have big ego issues involved in such things, this is definitely a good workout that will take you a couple of hours and is really fun. We are chess players after all, so resolving positions is our goal, right?

If you would like to share my study plan, please feel free to join the series. I’m sure at the very least it helped me produce a better result than without it.

25% of all critical infrastructure in the ...