Australian exports of the nine products that have been subject to trade sanctions from China in the past two years.

A NEW study has found that a series of trade sanctions imposed by China have had little impact on the Australian beef industry.

Researchers Scott Waldren from the University of Queensland and Victor ferguson and Darren Lim at the Australian National University looked at the economic fallout from trade sanctions imposed on several industries, including beef, cotton, barley and hay.

While many feared the sanctions would have broad impacts on both countries, the report found that Australian industries have adapted well, given the size of the Chinese market.

“China has been Australia’s most important export market for decades,” the report says.

“Comparative economic forces and deep complementarities resulted in continued growth in bilateral trade after the opening of the Chinese market in 1978, making China Australia’s largest bilateral trading partner in 2006 and the conclusion of ChAFTA in 2015 . “

“Despite exports from many industries concentrated in the Chinese market before the disruption, by mid-2021 the net effects on world trade of import sanctions were more modest than many feared.”

The report found that Australian exporters have been successful in continuing to trade using three techniques.

Sanctions against the beef industry began in March last year, with China suspending the export licenses of four Australian processors, citing labeling issues. Three other factories have since been suspended.

The report said that uncovering often unavoidable small technical details like this was an “informal” trade sanction.

“Such errors on a small number of boxes are inevitable in high volume trading and are often either ignored or resolved quickly through unofficial channels,” the report says.

“However, they do provide a flexible mechanism for sanctioning ‘informally’, as national customs agencies have significant discretion over how they deal with plant certification and label violations.”

With a global beef shortage and demand from several other countries, the industry has been able to find markets quickly, as it already trades with more than 100 countries.

“While Australia was a major exporter, it did not dominate the global supply. The other major exporters are Brazil, the United States and Argentina, all of which increased their exports to China in 2020-2021. “ 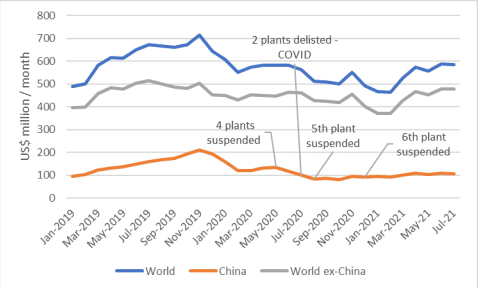 Australian beef exports to China and other countries. Click to enlarge the image

While alternative markets were convenient for Australian exporters, the report found that the “porous nature” of the sanctions allowed the industry to continue trading with China. Many processors were able to kill in factories, which still had licenses, and continue to send products to China.

“This strategy was particularly used for higher-value beef and was mainly available to conglomerates like JBS that operate multiple plants,” the report says.

“The Chinese beef market remained valuable to many Australian factories as it took a wide range of cuts (in frozen form), which increases the overall average value that can be extracted from a carcass.”

Compared with the previous year, the value of Australian beef exports to China fell 49% and total beef exports fell 21%. But the report says sanctions coinciding with torrential rains in many parts of the country have complicated the numbers.

“As the rain increased the supply of crops like barley, it limited the supply of livestock as pastoralists rebuilt herds to take advantage of the forage base,” the report said.

“Since herd rebuilding is a productive enterprise that could mitigate the impacts of loss of access to the Chinese market, it could be seen as a new form of transformation.”

Penalties for barley and cotton are more cut and dried

While the sanctions against the beef industry were informal and could be circumvented by Australian exporters, the situation with barley and cotton was more stark.

Barley exporters were hit with an 80% tariff in March last year, virtually halting trade which accounted for 76% of Australia’s exports at the time. 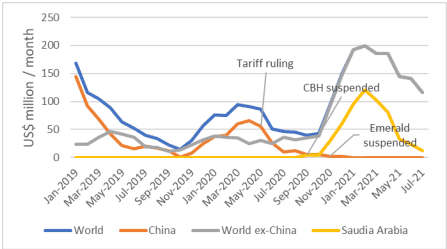 For a short time after the tariffs, barley exporters were able to turn away from the market by selling to China’s special economic zones where tariffs were not applied – a loophole that was closed by Beijing.

“Other exporters have filled the void left by Australia’s exit from the Chinese market, particularly Canada and France,” the report said.

“However, the tight global supply meant that such adjustments left voids in the markets they previously supplied.

“Australian companies have been able to capitalize on this, exporting to 25 markets in 2020, including barely malting markets in Thailand, Vietnam, Mexico and Japan, and the lower value feed market in Arabia. Arabia. “

While Australia harvested a record barley crop last year, there is some evidence to suggest growers have planted other crops.

“Some agricultural advisers have discovered that the consideration of Chinese barriers had pushed some producers to abandon barley,” said the report.

“But at a slower rate than expected due to other considerations, in particular the high yields of barley, its value as a rotational crop and the sustained demand.”

For cotton, the Chinese Ministry of Commerce and the National Development and Reform Commission have reportedly told state-owned spinning mills, importers and storage companies to stop importing Australian cotton. 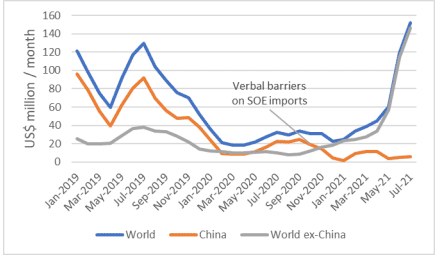 China is the world’s largest importer of cotton and took about 70% of Australia’s exports before the sanction.

Product uniformity meant reallocation was an easy option for the industry, and cotton exports increased 150% from the previous year – with Bangladesh, Vietnam and Indonesia emerging as markets.

The report found that reassignment like this was the only technique used by all industries.

“The market dynamics most conducive to reallocation were relatively low levels of concentration of shipper demand and high product homogeneity,” the report says.

“In general, the more homogeneous the product, the more transparent the reallocation to alternative markets seems.

“In each case, global supply was relatively inelastic in the short term, ruling out the possibility that a third market could fill the void left by Australia.”

Improved severe risk for parts of the ...